What is CPVC | Properties, Characteristics & Uses 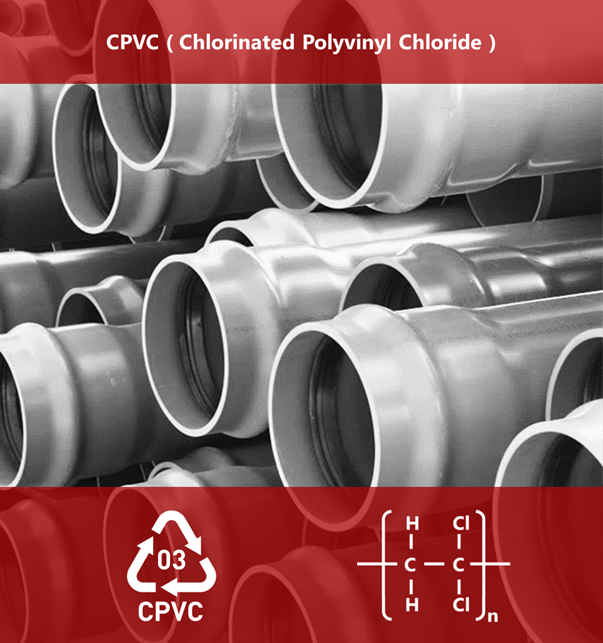 CPVC is the abbreviation used to describe the synthetic plastic material known as Chlorinated Polyvinyl Chloride. Chlorinated Polyvinyl Chloride (CPVC) is the further reacted form of polyvinyl chloride (PVC) and expresses a few key similarities and differences to this widely utilized plastic. CPVC is a polymer and a plastic that is frequently used in the manufacture of pipes for plumbing and vents, of liners, structural materials, and chemically resistant equipment.

Similar to PVC, CPVC is made from the polymerization reaction of vinyl chloride (VC) monomer molecules. The vinyl chloride used in CPVC / PVC synthesis is the product of reacting ethylene gas from natural hydrocarbon sources and chlorine gas from sodium chloride, NaCl rock salt. CPVC differs from PVC in the molecular level of chlorination it receives during manufacture.

In effect, CPVC is PVC that has undergone further free radical chlorination where elemental chlorine atoms are continuously added to the polymer resin until it is 57% to 69% chlorine by mass. This further chlorination changes the classification of the resulting plastic material from PVC to CPVC, and in turn modifies CPVC’s characteristic properties, operation ranges and acceptable application scenarios. 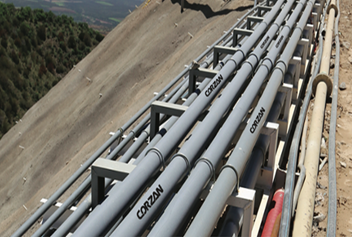 CPVC is a polymeric solid plastic and differs significantly from liquid solutions in how it absorbs and releases heat, behaves on cooling and heating, undergoes phase changes, and responds to pressure and chemical influences. Products made from CPVC such as pipe have a recommended maximum operating temperature of 200°F. CPVC operational temperatures can satisfactory range from 200°F to 230°F, given proper conditions of pressure and chemical suitability. These conditional extremes are often reserved, however, for unique situations that have been professionally engineered and receive stringent supervision.

When installed and operated per government, manufacturer guidelines, the life expectancy and compatibility of CPVC is not usually a concern and is often longer than the timeframe of the application. As an example, CPVC pipework installed for use in 1959 continues to report satisfactory performance in its intended operation.

What is CPVC Used For CPVC as an application material has been in use since the 1950s and has a growing list of products, industry and market uses. The most common CPVC products in use today are schedule 80 CPVC pipes and plumbing. CPVC plumbing is employed within the domestic delivery of hot and cold potable water, chemical synthesis and transfer, agricultural fertilizers and irrigation, as well as drain, waste and venting pipes. Common industries that utilize CPVC include commercial plumbing, chemical processing, chlor alkali, mineral mining and development, electrical power production, and water, wastewater treatment.

Similar to PVC, CPVC as a material is not recommended for pressurized gases or air but can be acceptable for pressurized liquids up to specified limits. Neither is CPVC recommended for long term outdoor installation and use unless it has been painted or features a protective cover. CPVC that has had UV inhibitors added is only recommended for short term sunlight UV exposure as in construction and installation operations. Some common chemicals handled by CPVC include: alums, alcohol compounds (e.g. Amyl, Benzyl, Butyl, Ethyl, Methyl), chlorinated molecules such as disinfectants and brines, hydrogen peroxide, bases such as sodium and potassium hydroxide, and strong acids such as hydrochloric and sulfuric acid. When fabricated according to federal regulations and independent authority standards including the FDA, NSF, ANSI, AWWA and ASTM, CPVC products are rated and approved non toxic for food grade, consumable and drinking (potable) water applications.